“A Celebration” is 40 years old this year. Originally released on March 22, 1982, one week from today U2 are releasing a special Record Store Day release to commemorate the anniversary. The song was U2’s eighth single, released between the albums of October and War. The lyrics of the song deal with the difficulty of wanting to celebrate life in the shadow of the atomic bomb. The band were just finishing the second leg of the October tour on December 13, 1981, and were due to play in London on December 20. Because they had a short break in the schedule, they decided to go into the studio and work on a new song. U2 were joined by Steve Lillywhite at the Basing Street Studios in London, a facility that had been established by Chris Blackwell of Island Records. 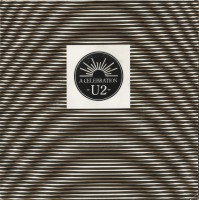 They worked on two songs, “A Celebration” and “Trash, Trampoline and the Party Girl” which made up the single. The Edge would later remark that the songs may have suffered a bit as a result of the band’s post-tour intensity and the fact they had not yet “come down” enough to properly record in a studio. “A Celebration” had been developed during the tour, but they didn’t have a B-side worked out, and “Party Girl” was written and recorded in just 40 minutes.

The song was released as a 7-inch single in 1982. It has never been released as a 12-inch, and the upcoming release for Record Store Day will be the first release in that format. The single was not a worldwide release, and was not issued in North America. In most regions the single featured “A Celebration” on the A-Side and “Trash, Trampoline and the Party Girl” on the B-Side. In Japan however, the single was backed with “Fire” instead. 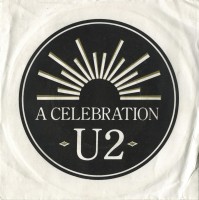 The cover of the 7-inch in most regions featured an interference pattern made by crisscrossing lines in black and gold. In the center in a small square is a round black circle with a sunburst pattern and the name of the single and the band. In France the middle symbol is much bigger and takes up the entire cover of the single, without the interference pattern. In Japan a photograph of the band is added as well as a bigger U2 on the sleeve. There are also variations on the other sleeves as well, with some featuring the black lines printed over the black lines, and on others this pattern is reversed.

For many years the only way to find the song on CD was via a promotional only compilation sent out by Pellegrino Promotions in 1995. The B.L.A.S.T. Modern Rock Program #8 included both the A and B side of the single on the compilation. These were sent to radio stations to promote current music, but each volume would also feature some older tracks as well. In 1999 a commercial compilation, Now (That’s What I Call Music) 1982 included the A-side on CD for the first time ever commercially. The songs were both included on The Complete U2 on iTunes in 2004. And in 2008, both the A and B side would be included on deluxe versions of October. “A Celebration” had also been included on cassette in the UK as an extra track on the cassette single released for “Pride (In the Name of Love)”. Also notable is U2’s contribution of “A Celebration” to a 1987 compilation Rock Against AIDS put together by KZEW Radio. On that compilation the song is listed as “A Celebration (I Believe)” and opens the album. The album benefited AIDS research at Parkland Hospital in Dallas. It was one of U2’s earliest participation in any sort of AIDS charity, an area where the band, especially Bono, would focus a lot of attention in coming years. 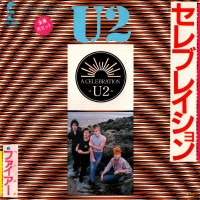 There was a video filmed for the song as well, just the third video that U2 had done. It was filmed by Meiert Avis. Of the video Bono says, “We had itinerant boys as the four horsemen of the Apocalypse and me in ridiculous red pants in Kilmainham jail. I think I had a badger on my head as well. Some pieces of music are obscured by the haircuts I think it’s fair to say.” The video was filmed inside Kilmainham jail, located on Inchicore Road in Dublin. Larry Mullen said that the video was “filmed it with the idea of breaking out. It was very much a look at ourselves. Like when we were in school and everyone was telling us ‘you’re crap’ and we couldn’t get a record deal, it was the triumph of breaking through.” Kilmainham is a tourist attraction that one can tour. Its a former prison built in 1796 and shut down in 1924. The jail was used in films In the Name of the Father, Michael Collins and Paddington 2. Mountjoy prison, mentioned in the lyrics of the song, is a different facility, still in operation in the city, located near Croke Park.

VIDEO: “A Celebration” by Meiert Avis

The band can also be seen performing outside in the video. The area behind them is the Summerhill area of Dublin. In the 1980s old Georgian houses in this area were being torn down in the area and replaced with social housing. The band performed on Gardiner Street while these houses are sitting half destroyed behind the band.

“A Celebration” made it’s live debut in Austin, Texas on February 13, 1982. The song was only played on a handful of dates on the October and War tours, and was last performed on November 30, 1983 in Tokyo. In total, we are aware of only 32 appearances of the song, including one televised appearance on the show “Get Set for Summer” in 1982. (U2Gigs listing for “A Celebration”) “Party Girl” as it’s known these days has had a much longer shelf life as a song in concert. The song was first performed on February 26, 1983 in Dundee, Scotland. And over the years it’s appeared 192 times in concert, the most frequently played B-Side of U2’s career. The last performance where the song appeared was November 3, 2015 in London, England. The second to last performance, at the Lanxess Arena in Koln is included on the upcoming release for Record Store Day next week. Over the years U2 have invited a number of fans onstage to perform with the band during “Party Girl”. The performance in Koln is one of those occasions, where U2 pulled a young fan named Gilles from the crowd to perform with them. (U2Gigs listing for “Party Girl”)

Multiple live recordings of “Party Girl” have been released officially: a June 5, 1983 performance from Denver on the Under a Blood Red Sky album and U2 Live at Red Rocks video; a July 4, 1987 performance from Paris on the iTunes-only Live from Paris and the DVD accompanying the super-deluxe reissue of The Joshua Tree; and a December 31, 1989 performance from Dublin, Ireland on the Love: Live from the Point Depot section of The Complete U2 on iTunes. The inclusion of the song on Under A Blood Red Sky has made the song probably better known than the A-Side of the single.

The 2022 release, celebrating the 40th anniversary of the original is released next Saturday for Record Store Day. (April 23) The single has not been released before in the 12-inch format. The release will feature both of the original songs from the 7-inch single, as well as two previously unreleased recordings. A live version of “Party Girl” from Koln in 2015 is included, as is a studio outtake of the band performing “A Celebration”. The release features a new cover designed by Shaughn McGrath on the front and images from the video on the back cover, and the vinyl is black vinyl. It joins “Three”, “11 O’Clock Tick Tock”, “Fire” and “Gloria” as singles which have been reissued for their 40th anniversaries. The outtake version of “A Celebration” has been mixed by Richard Rainey. The original versions of “A Celebration” and “Party Girl”, produced by Steve Lillywhite, are the 2008 remastered versions by Arnie Acosta which were done for the release of the deluxe October album. The two newer tracks are mastered by Scott Sedillo.

Although Record Store Day used to be quite limited in geography, it has greatly expanded in recent years. The day celebrating the independent record shop now has listings on their site for stores participating in Australia, Belgium, Brazil, Canada, Denmark, France, Germany, Greece, Hong Kong, Hungary, Ireland, Israel, Italy, Japan, Mexico, Netherlands, New Zealand, Poland, Portugal, Sweden, and the United Kingdom, as well as the United States where it all started. We are also aware that stores in other countries do participate, even if they have not listed themselves on the Record Store Day site.